If you follow small college athletics you have no doubt already heard the news that Nebraska Wesleyan is leaving the Great Plains athletic conference and going full-fledged into NCAA Division III.
To be honest I wasn’t sure how much I really wanted to write about this subject. It doesn’t particularly pertaining to NAIA football and it’s really more of a membership issue of the NAIA. But given the fact that the NAIA will be losing a football member I thought I should weigh in briefly on the subject.

My biggest issue with the entire situation is how things played out for the remaining members of the Great Plains Athletic Conference. There is no doubt that Nebraska Wesleyan was always a little bit different animal with their dual affiliation in the NAIA and NCAA. In fact for the last 15 years of the Great Plains athletic members in the conference have wondered what Nebraska Wesleyan’s intention would be if they kept their dual affiliation.

On more than one occasion the envelope was pushed by members of the Great Plains Athletic Conference for Nebraska Wesleyan to make a decision between the NAIA and NCAA Division III as they were the only remaining dual affiliated member. About 10 years ago the athletic directors in the conference pushed for Wesleyan to either declare everything NAIA  or leave the conference. The measure passed through the athletic directors but was stalled with the President’s Council. There are more details than that, I know this to be fact given my former position as an athletic director in the conference. But those details don’t add anything else to this story.

So given the history of leniency among the conference members I was pretty shocked to hear that a media outlet in Cedar Rapids was reporting the move before members of the conference and even been informed of any official talks between the school in their new conference.

Further, I was shocked to hear confirmation of the rumors from a former football coach in the new conference. That’s when my wheels got turning and I started making phone calls. This was approximately four days before the media report.

I guess that’s where I have the biggest problem. I’ve never had an issue with people that changed affiliations for the betterment of their school. My opinion is they should stay in the NAIA but ultimately when they make a move that move is up to them and I wish them well.

Considering the conference bent over backwards over the last 15 years to consider the needs of Nebraska Wesleyan as a dual affiliated member it is pretty bad on them to not even inform the commissioner or any of the other members of the conference that they were looking at making a switch into a new conference.

I personally know many of the athletic directors and the Great Plains Athletic Conference and I consider Corey Westra to be one of, if not the best, commissioner in the NAIA. So for Nebraska Wesleyan to not even give a hint that any of this was happening is a slap in the face of the conference, they’re colleagues and the commissioner who deserved better from them considering all that was done for them in the last 15 years.

I wish them the best of luck in Division III and hope that it is the right move for their school and their athletic department. Hindsight is always 20/20 but for a school like Nebraska Wesleyan to leave the essentially in a cloak of darkness is just wrong. 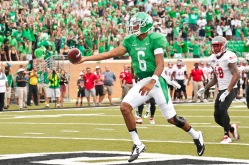